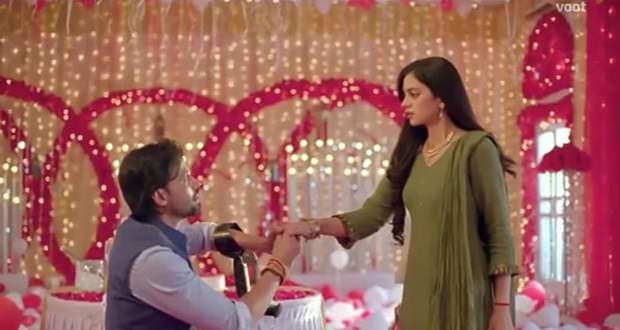 Today's Namak Ishq Ka 22 December 2020 episode starts with Yug telling Irawati that she did wrong by slapping Gunjan and confronts her.

Elsewhere, Chamcham is practising dance performance while a delivery boy comes and gives them gifts that are for her sibling saying that they are from Ronit.

Chamcham calls Ronit but Yug picks up and praises her skills thinking she is the jewellers assistant.

Chamcham starts rambling about Aara city which confuses Yug and she is about to introduce herself when Ronit snatches the phone.

Yug goes away while Ronit tells Chamcham to reach Pratap Auditorium for the shooting.

Ronit reaches the Pratap Auditorium and thinks he'll propose to Chamcham on his anniversary day.

Meanwhile, Yug comes there with Roopa and thinks of surprising Ronit.

Chamcham comes to the auditorium and gets confused when she sees no one at the decorated auditorium.

Ronit comes there and tells Chamcham to cut the cake for the celebration of the movie.

Ronit tells Chamcham to close her eyes and puts a necklace around her neck.

Chamcham gets frightened while Ronit proposes to her addressing her as Kahani which makes her tense.

Elsewhere, Yug takes Roopa to an auditorium and it is revealed to the viewers that they went into two different parts of the auditorium.

Chamcham rejects him and goes away.

Yug spots Ronit and calls him saying that he knew about his surprise and brought Roopa with him for a surprise.

Meanwhile, Kahani is eating sugar from the jar while telling Lucky and Rani about the proposal.

Lucky gets scared and Kahani looks for the key but isn't able to find it which worries her.