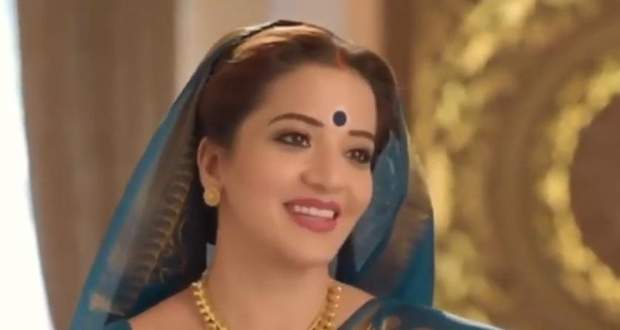 Today's Namak Ishq Ka 23 December 2020 episode starts with Gunjan admiring Roopa's necklace and praising her and Ronak's love for each other.

A huge parcel comes for Irawati which makes others wonder who sent it.

Yug's mother says that Juhi will light up the whole place when she comes while Yug gives Irawati the parcel.

Irawati curiously opens the parcel and sees a threatening note saying that the person knows about her killings and making her husband handicap. It further warns her to surrender.

Irawati lies to the family that it is a note from her childhood friend and goes.

Yug opens his closet and puts the lock that was in Kahani's flashback inside. The key is on the lower and but he doesn't see it while Kahani stands outside the mansion.

A grocery truck comes and Kahani goes in it and covers herself with a gunny sack.

Roopa and Gunjan are having a competition on whose puri is the biggest while Yug and Ronit race to get the skimmer.

Irawati gets a message that tells her that her daughters will suffer for her crime as she did not surrender even after being warned.

Kahani struggles to get out of the gunny bag while Harsh thinks that it is a ghost and tells Yug to check.

Yug opens the funny bag and sees potatoes while Kahani finds the keys in Yug's closet.

Kahani hides in the closet when she hears coming towards her.

Ronak comes and is about to open to close but closes it when Roopa tells him she has his outfit for the party.

The closet gets shut and Kahani is unable to open it when Yug opens the closet but gets distracted due to a phone call.

Kahani slips from the room while Yug is on the call.

© Copyright tellybest.com, 2020, 2021. All Rights Reserved. Unauthorized use and/or duplication of any material from tellybest.com without written permission is strictly prohibited.
Cached Saved on: Wednesday 20th of January 2021 11:40:34 PMCached Disp on: Thursday 21st of January 2021 10:08:21 PM