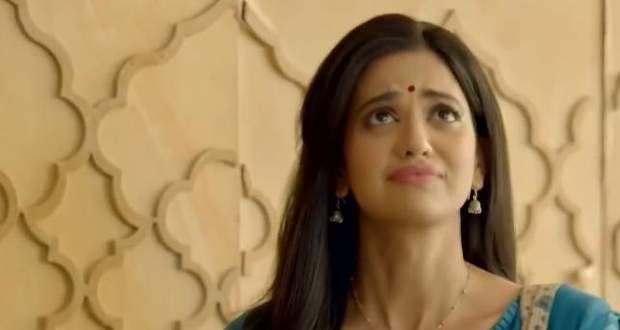 Today's Namak Ishq Ka 25 December 2020 episode starts with Kahani seeing the shooter and rising towards Roopa to save her.

Kahani saves Roopa just as the shooter fires and Yug goes outside to look for the shooter.

Irawati wakes up an unconscious Kahani while Ronak goes after the shooter.

Yug comes inside and points out that Kahani is hurt on the arm and she again falls unconscious seeing blood.

Yug takes her into a room and calls the doctor while Roopa says that the girl saved her life.

Gunjan wonders out loud why someone would want to hurt Roopa while Irawati reveals that she was the target by harming her daughters.

Irawati looks at the notes and messages she got while Yug's mother comes there and tells her to think who might be the attacker.

Irawati remembers that the waiter she saw was Thakur's servant and realises that he is the one who attacked Roopa.

Yug tells Roopa to sleep and that she will stay beside Kahani.

Meanwhile, Irawati plays with the playing cards and brings out card numbers 2 and 3.

She then calls someone and tells the person to look for Thakur's servant in street number 23.

Kahani wakes up while Yug talks to her and tells her to sit down as she is told by the doctor to rest.

However, Kahani insists that she has to go to her siblings while Yig tells her to rest.

Elsewhere, Roopa calls Ronit who is eating idli, and asks if he ate.

Ronit lies saying he didn't eat anything and says that he won't come to the house until he catches the attacker and cuts the call.