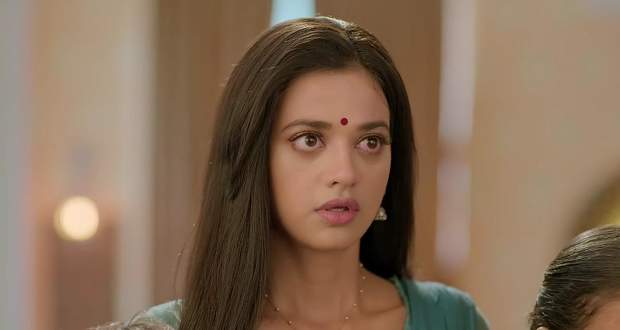 Today's Namak Ishq Ka 29 December 2020 episode starts with police inquiring who got shot while Roopa reveals that she called the police.

The police ask Kahani her whereabouts and ask her if she knew Thakur while Irawati gets frightened and tells them to go.

Later, Kahani consoles the kids and tells them that no one should find out why they came there while Yug overhears them.

He tells Roopa that they should not trust Kahani quickly while she tells him that he should learn how to trust others.

Yug sees Kahani and realises that she heard their conversation.

She ignores him and goes back after putting the glass in the kitchen.

Kahani leaves Varma Niwas after Roopa fails to convince her to stay a little longer.

Yug takes out a note from his drawer and remembers how her mother felt hurt when his father left her for a dancer.

At the same time, Saroj comes there and tells him that he should have stopped Kahani from leaving the place and tries to convince him that she is different from other dancers.

Meanwhile, Kahani gets advance money from a lady to dance at her daughter's Mehandi celebration.

Yug comes to Kahani's house and Lucky asks her why he came there while telling him Kahani's whereabouts.

Kahani is dancing at the Mehandi celebration while Yug comes there and saves her as she falls unconscious.

Kahani regains consciousness and starts blabbering while Yug tells her to shut up and does her wound's dressing.

© Copyright tellybest.com, 2020, 2021. All Rights Reserved. Unauthorized use and/or duplication of any material from tellybest.com without written permission is strictly prohibited.
Cached Saved on: Tuesday 8th of June 2021 05:30:55 AMCached Disp on: Wednesday 16th of June 2021 06:40:34 AM