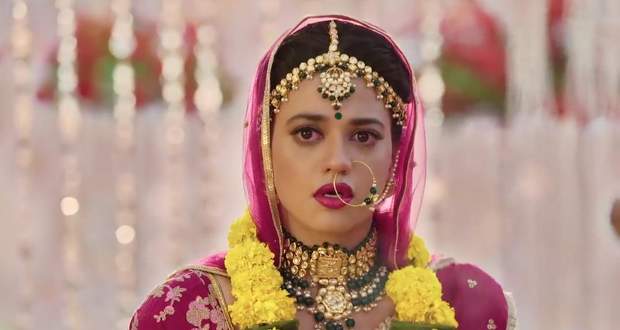 Today's Namak Ishq Ka 30 December 2020 episode starts with Yug asking Roopa if someone can have a mistake in knowing a person by their first impression.

Roopa gives a positive answer and praises Ronak while thanking Yug for informing him about Kahani.

Meanwhile, Ronit is at Kahani's house trying to flirt with her.

Ronak comes home and is welcomed by Yug asking him how he knows Kahani. He manages to get himself out of the situation by lying.

Next morning, Yug doesn't find anyone in the house and asks a servant their whereabouts.

They say that the house members are preparing for his Haldi function.

Suddenly, Roopa comes there with Kahani and says that she is their dancer teacher. Roopa tells him to learn from her and goes.

Later, Kahani is teaching him dance moves but he doesn't move and stands still.

He reveals that he does not know how to dance and Kahani laughs at him.

Yug goes outside where a person from the office gives him the call details of Ronak.

Meanwhile, Kahani gets a call from a doctor who informs her that they need to do Lucky's operation within three months and will need 25 lakhs.

Yug checks the number in Ronak's phone and sees that the most dialled number is of Necklace girl.

He calls her but it doesn't connect while Ronak thinks that his plan went successful as he had changed Kahani's number.

Roopa greets Mausi who is disgusted by the scar on her face.
Further, Mausi reaches Kahani's home with Ronak and asks for her hand in marriage.

Ronak tells her that he was once married but her wife died and that wants to accept her siblings and wants to make Lucky better.

Ronak is about to leave when Kahani accepts her proposal.

Yug gets a call and reaches a temple where he sees Ronak and Kahani exchanging rings.