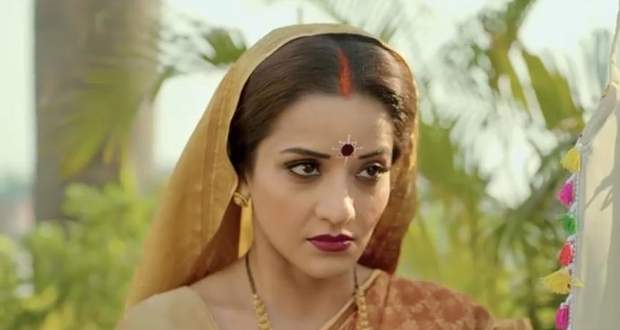 She tells the servants to bring sweets and tells Kahani to share the good news to everyone with sweets.

Kahani gives the sweet to everyone and lastly gives a ladoo to Yug but he leaves from there.

Later, Kahani is thinking that she would have not gone ahead with marriage if she had the time to arrange money for Lucky's marriage while Yug knocks oh her door.

He comes inside with a briefcase and tells her to not go ahead with marriage and trap that man. He tells her that the man she's married was married when she thinks that her first wife died as Ronit had told her.

Despite Yug's warning, Kahani stays adamant on her decision when Yug opens the briefcase and showers the money on her.

He tells to name the amount to leave that man from her love trap which hurts her and she tells him to leave.

Kahani cries while Yug goes to an abandoned place and destroys his car in anger.

He lights the car on fire meanwhile Ronit calls Kahani and she tells him that a man came to her house and told her not to marry him.

Yug enters the house and is about to confront him when Gunjan and Roopa come there and talk to him while Ronit escapes.

Later, he is driving while another car comes in front of his car and stops him.

Ronit angrily exits from the car but gets scared when Yug emerges from the other car.

Meanwhile, Irawati receives a menacing call to surrender herself for brutalising her husband before noon of the next day.