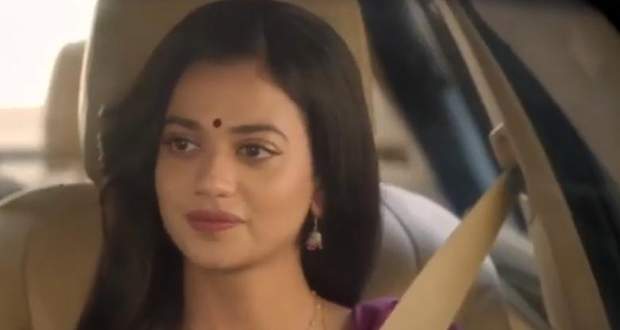 Today's Namak Ishq Ka 5 January 2021 episode starts with Ronak fearing as Yug gets out of the car.

Suddenly, Yug gets on his knees and begs him to not marry Kahani and betray Roopa but Ronak stays adamant on his decision of marrying Kahani.

Later, Ronak is packing Kahani's belongings and tells her that they are going to his hometown for the wedding.

Kahani tells him that she has to inform her workplace about her leaving and goes.

Later, Roopa gifts Kahani a pendant that contains a compartment for a picture while a ball hits her.

Patanga takes the ball and leaves while Roopa accidentally pucks up another pendant and outs it in the box to give to Kahani.

Kahani is rising to get out of the house and is about to fall from the stairs but Yug holds her hand.

However, as she is about to stabilise herself, he let's go of her hand and she falls front the stairs injuring herself.

Kahani struggles to get up while Yug comes forward to help her but step back when he realises what he's doing.

Kahani goes limping while Roopa looks on from the top of the stairs.

Roopa scolds Yug and questions him if he loves and hates Kahani at the same time.

Later, Roopa opens her pendant and realises that the pendant to exchange upon seeing the pendant empty of her and Ronak's picture.

Meanwhile, Kahani opens her pendant and gets shocked finding Roopa and Ronak's picture and realised that Ronny is Ronak.

Elsewhere, the police come to Irawati's house and inform them that they came there to investigate Ravikant's case as it has been reopened by him.

Irawati convinces them that someone has joked with them after which police tells them to talk with their lawyer and close the case.