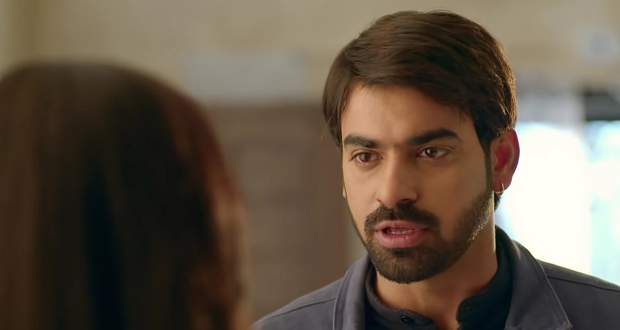 Ronak calls them orphans while Kahani shouts at him that she is their family and to never call them orphans ever again.

Kahani stops at Yug and tells him to recall what he saw today and just think that not all dancers are bad in this world and goes away with the kids.

He tells Kahani that he had to go against his family because of her while she says that she didn't tell him to care for her and says to give her the bills as she will pay them and do not insult her.

However, Yug tells her that he'll insult her till she stays in the house and tells her to go if she wants peace.

Kahani begs him to not show his anger in front of the kids and leaves while Yug remembers Kahani murdering in the hospital about Ronak kidnapping Rani and Lucky.

Yug drags Ronak to the roof and asks him if he kidnapped Lucky and Rani.

Ronak says that Kahani is lying while Kahani tells him to swear on his son, Harsh.

Ronak says that he search on Harsh, his family and everyone else that he didn't kidnap the kids while Yug doesn't believe him and pushes him from the roof.

Yug is hanging Ronak from the roof and asks him to tell the truth or he will drop him on the count of ten.

Ronak reveals that he had kidnapped Lucky and Rani to force Kahani to marry him.

Kahani asks him if she ever loved him while he reveals to Yug that she never once loved him.

Kahani tells Yug that she told him again and again that she was blackmailed but no one listened to her and that now he truth is out.

She leaves while Yug tells Ronak to go from there.

Yug thinks that the girl he thought to be a mistake was not wrong ans that he has now become wrong in her eyes.