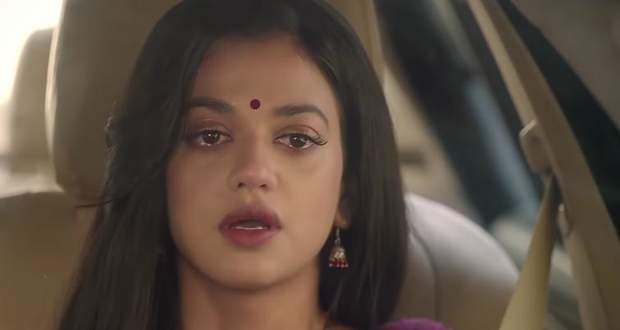 Today's Namak Ishq Ka 6 January 2021 episode starts with Kahani looking at the photo of Ronit in the pendant and remembering how he had done things to trap her in his game.

She further thinks how Yug tried to convince her into not marrying Ronit.

She sees Yug's call on Ronit's phone and thinks that only he can save her.

Kahani takes off her ring and tells Ronak that they have to go back for the ring but he refuses.

She further says a puzzle and Lucky and Rani remember that it is a code word for emergency after which Lucky fakes having difficulty problem.

Kahani tells Ronak that they have to stop at a pharmacy for his injection.

Ronak goes to the pharmacy while Kahani, Lucky and Rani run away from there.

Yug calls Ronak but he tells him that it doesn't matter that he has frozen his accounts as he has money.

Kahani hides behind a bush and plans to call Yug but remembers that she has left it in the car.

Meanwhile, Yug takes Kahani's number from his mother and calls her but Robak takes the phone and cuts the call.

Ronak sees his and Roopa's picture in the pendant and feels upset.

Elsewhere, Irawati is recording herself accepting her crimes while Gunjan overhears her and thinks that her plan went successful.

However, Irawati thinks to herself that the video is bait to catch her culprit.

Yug tells someone to track the number and goes while Irawati tells her attacker to come to her daughter's Mehandi ceremony if he wants the video evidence.

Elsewhere, Kahani overhears some goon telling Ronit on the phone that they will find her and the kids.

Kahani sees a car with Mumbai's number plate on it and tells the kids that they have to get in that car.

She hides in the car with kids while Yug decides to go back to Mumbai.