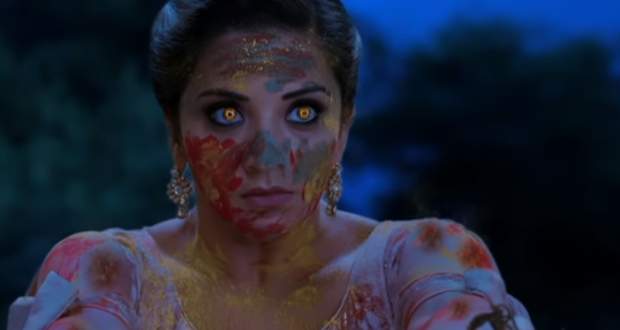 Today's Nazar 2 17 Mar episode starts with Madhulika getting out of the Daayan tree and getting mad at Palak. She seeks help from the tree to get healed.

Meanwhile, Palak gives Rudraksha necklace to Apurv while later Urvashi thanks her. Palak tries to tell Urvashi the truth about Madhulika and she arrives at the same time.

Palak changes the topic while Madhulika makes an excuse that she went for some work. Later, Madhulika seeks help from a shape-shifting demon to kill Palak.

The demon takes the form of a clown and captures a kid in the balloon. Palak and Apurv come in the same park and Apurv wishes to play with the clown.

Palak gets suspicious of the clown and doesn’t let Apurv take a balloon from him. The clown holds Palak’s hand and warns her of the consequences.

Later, Daadi scolds Palak for taking Apurv outside without anyone’s permission. Palak sees a sign on her hand and is asked to come on the terrace by Panditji.

Palak learns that Naina and her Mama Maami are being evicted from their house. She learns that Panditji is with Naina and turns to find the same shape-shifting demon as the clown.

The demon tries to kill Palak while she falls off the terrace and hangs by the railing. The Shape-shifting demon leaves while Apurv saves Palak.

Apurv consoles Palak while Madhulika witnesses the scene. Madhulika cuts the demon’s hand but the demon grows it again. Madhulika threatens to kill him.