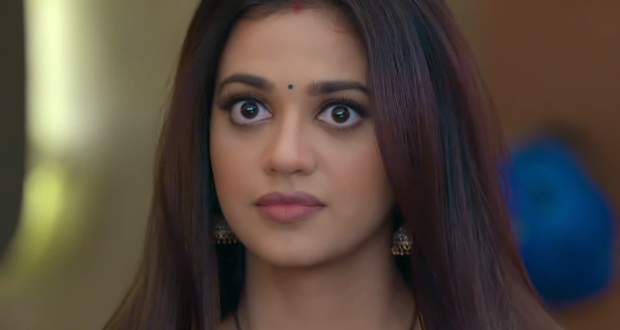 Today's Nazar 2 18 Mar episode starts with Palak asking Panditji about the shape-shifting demon. He states that his qualities and weaknesses would be similar to a chameleon.

Palak further learns that Apurv is excited about his upcoming birthday. At the same time, he is surprised by the family members with cake and birthday poppers.

Apurv wishes for the superhero powers and cuts the cake. They all enjoy Apurv’s birthday while Palak learns that there would be a fancy dress competition at his birthday party.

Palak continues to think about what Panditji said while Madhulika confronts her about being scared. She gets further scared to learn that the shape-shifter has taken Madhulika’s form.

She further finds the same eyes as a kid and a waiter. Daadi comes to talk to her and shouts at her. The shape-shifter later holds Palak using his tongue and hypnotizes her.

The shape-shifter takes the form of a magician and shows Palak standing in a box. He says he will make her invisible but at the same time, Apurv comes while playing the mouth organ.

The demon gets affected by the peacock feather on Apurv’s head. Madhulika makes the demon go away to save him from getting exposed. Apurv gets Palak out of the box and Madhulika realizes Palak did it on purpose.

Upcoming Nazar 2 episode update: Palak gets in danger while Apurv rushes to save her.