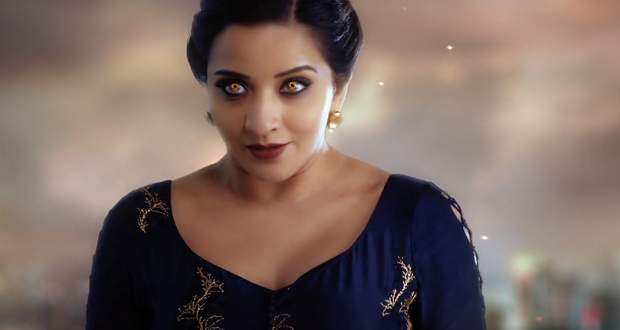 Today's Nazar 2 20 Feb episode starts with Madhulika attacking the other Daayan. The other Daayan gets shocked to see her braid burning with fire.

Madhulika is about to kill the other Daayan when some neighbors witness the scene. Madhulika can’t risk being exposed and kills the boys.

She reveals she killed her own father as he learned her truth. She further reveals that Apurv is mentally unstable because of her and doesn’t want him to get married.

She wants to kill him on Bali Amavasya night to become an Ekayan. Meanwhile, Palak wants her sister to get married before she dies.

There is a Trishul mark on her back just like a Devik that shines. Later, Urvashi is worried about the Daayan and wants Apurv to get married.

Narmada reveals that she has fixed Apurv’s alliance by giving 2 crore rupees. Later, the wedding preparations of Apurv start and Madhulika is adamant to stop it.

Pandit asks the two girls to put Bhasm outside the door but they take Sindoor instead. Meanwhile, the other Daayan is present outside the window of Apurv.

Later, Palak enters the house to give the order of Laddoos and keeps her feet first on the Sindoor.