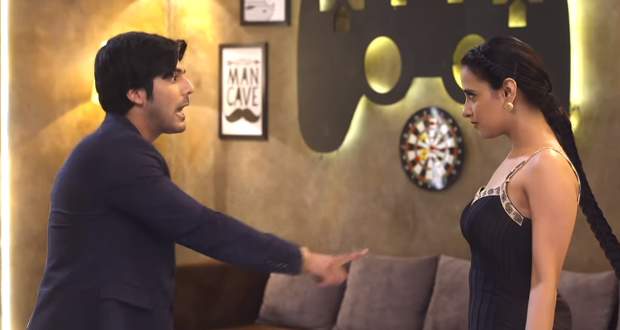 Today's Nazar 2 25 Feb episode starts with Madhulika instructing Urvashi and Narmada to take care of Apurv. She is going to take the Trishakti Ratna but wishes to give a fake Ratna.

She wishes to kill Vaishala to cancel Apurv’s wedding. Later, Apurv receives a big gift and gets excited and takes the box inside his room thinking it is sent by Madhulika.

Vaishala comes out of the box and Apurv thinks it is a friend. She reveals that she is a Daayan and shows him her big nails. Urvashi sends Hema and Malini to check on Apurv.

Apurv wishes to cut her nails while Vaishala turns her nails even bigger. Later, Hema and Malini arrive and find no one in the room. They think Appu is daydreaming and tells Urvashi and Narmada that Apruv was taking Dayan’s name.

Madhulika also learns the truth and gets angry. Meanwhile, Vaishala holds Apurv by his neck and starts sucking his life. Narmada arrives on time and puts Gangajal on Vaishala.

The Daayan enters the house through the wall and Urvashi and Narmada take Apurv to the temple. Later, Palak’s Maama and Maami make a plan and ask the doctor to threaten Palak.

The doctor asks the ward boy to shift Naina in the general ward and stop her treatment. Apurv gets ready to marry Apurv while Madhulika learns about Apurv’s marriage.