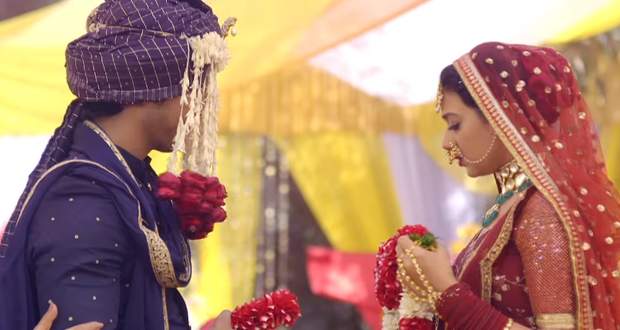 Today's Nazar 2 26 Feb episode starts with Urvashi and Narmada taking Apruv to the temple. The Daayan continues to follow them and jumps on top of their car.

She removes the top of the car while at the same time Madhulika arrives to attack Vaishala. Urvashi and Narmada take Apurv inside the temple.

Madhulika tries to stop the marriage by asking Narmada but fails. Meanwhile, Palak’s Maama and Maami convince her to get married on the same day.

Palak enters the temple while Madhulika decides to stop her. However, the goddess music troubles Madhulika and she runs away into the jungle and jumps in the lake.

Sarita lies that she has told Palak about Apurv’s mental state. The rituals of the marriage start with Varmala and Palak starts crying thinking about her situation.

Madhulika decides to attack from a distance and decides to invite other evil powers. She uses all her powers to stop the marriage and creates a big ball of fire.

The Mandap catches fire and Madhulika’s braid cuts in half. A lot of fire carrying arrow approach but stop mid-air by Palak’s powers and get destroyed. Madhulika thinks she must have scared the girl.

Upcoming Nazar 2 episode update: Madhulika gets shocked to learn that Palak got married to Apurv despite her attempts.

© Copyright tellybest.com, 2018 & 2019. All Rights Reserved. Unauthorized use and/or duplication of this material without written permission from tellybest.com is strictly prohibited.
Cached Saved on: Thursday 16th of July 2020 06:43:11 PM