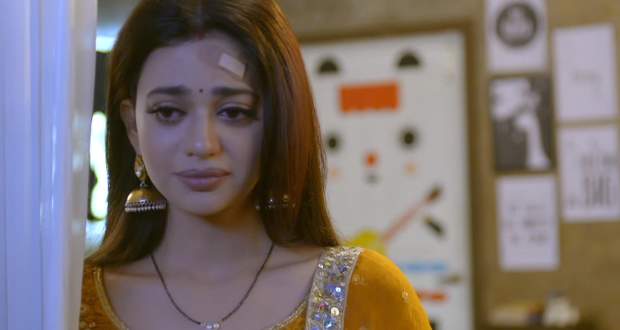 Today's Nazar 2 4 Mar episode starts with Palak asking Hema and Malini about the blackened flowers. Urvashi asks about the flowers but later they find the flowers fresh again.

It is all Madhulika’s plan to fool Palak. The Jagrata starts and Madhulika puts cotton plugs in her ears. Urvashi asks Madhulika to bring the Ratna while Madhulika gives the job to Palak.

Palak goes into the room and gets scared to see a Daayan figure. The Daayan holds Palak with her braid and accidentally throws Tri Shakti Ratna downstairs.

Palak tries to make everyone understand that there was someone who attacked her. She takes the name of Daayan and Apurv gets scared. Madhulika uses the opportunity and blames Palak for making excuses.

Palak gets upset and Apurv tries to cheer her up. He then plays a mouth organ to change Palak’s mood. Later, Urvashi and Narmada decide to search for the Daayan.

Madhulika tries to stop them and say Palak might be lying. She further shows them the dead body of the Daayan Vaishala. The inspector wonders who has cut Vaishala’s braid while Madhulika has done it.

Later, Palak shows the footprints of a Daayan on the wall while Madhulika tries to prove her wrong. Palak wishes to show the torn Dupatta to Urvashi and Narmada.