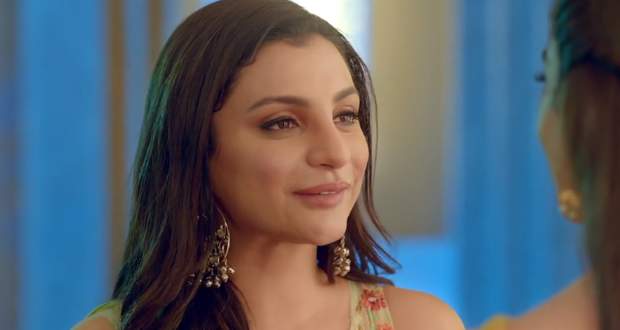 Today's Nazar 10 Jul episode starts with Nishant opening the gate of Trishila’s home. She welcomes them and produces a leaf that turns a dead plant into a green one. She enquires about Nishant’s arrival while he asks for her help.

At home, everyone tells Piya to take rest. At the same time, Ansh and Nishant return with Trishila.

Trishila and Piya get happy to see each other. She again starts to get unconscious, and Trishila says she has to do some rituals to get Piya back in her form.

Trishila says she will stay there until it’s the right time to do the rituals. Ansh offers to carry the suitcase, but she stops him by saying nobody is allowed to touch it.

In her room, she talks something about attacking while Adi turns into stone. Ansh discovers this and wonders what evil power is surrounding them.

Meanwhile, the police want to arrest Sanam and is not ready to listen to their explanation. Naman takes the blame of Mausi’s murder, and says something about a bat before leaving with police.

Piya again feels dizzy and Vedashree requests Trishila to get Piya in her original state. Ansh sees Trishila throwing some powder around Piya and gets suspicious.

Saavi deduces Naman wants Sanam to go to jail to help him escape.

Ansh confronts Piya about Trishila’s action, but Piya assures she will never do anything bad to her.

Saavi and Sanam come to meet Naman in jail. They get him out of jail and Naman confirms Mausi had the precious stone.

He also says her belongings are with police, so Panna will come to take the stone. They find all inspectors unconscious and deduce Panna is already there.