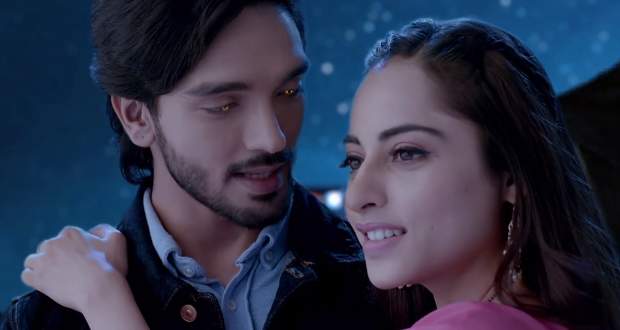 Today's Nazar 10 Oct episode starts with Piya trying to fix her Devik knife. Piya says only another Devik can fix the knife while Adi and Pari also try to join it.

Piya says they have to do the Visarjan of the knife. Later, she gets emotional while putting the knife in water.

Vedashree and Chaitali start preparing for a surprise anniversary party for Ansh and Piya. They try to invite the new neighbor but the neighbor closes the door on their face.

Rathod family members send Ansh to celebrate his anniversary with Piya. Ansh gives a romantic surprise to Piya while the knife continues to float in water.

The knife still possesses powers and breaks a whole mountain. A man breaks free from the mountain and a bow forms in the sky.

The man is a Devik who successfully fixes the knife. Meanwhile, Naman asks for a holiday from Nishant to go for a honeymoon.

Nishant gives him permission to go and says he doesn’t need to give an application. Later, Vedashree goes to her neighbor’s house and gets hurt by a plant.

The Devik announces he is returning back and at the same time, Ansh feels a strong electric shock by touching Piya.

In the morning, Ansh again gets an electric shock by touching Piya. Vedashree also feels a lot of pain in her wound.

Upcoming Nazar episode update: Nishant tries to deduce the reason why Ansh is unable to heal himself.

© Copyright tellybest.com, 2018 & 2019. All Rights Reserved. Unauthorized use and/or duplication of this material without written permission from tellybest.com is strictly prohibited.
Cached Saved on: Tuesday 14th of July 2020 04:37:14 PM