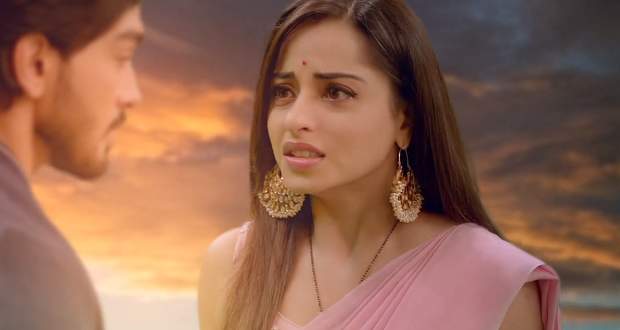 Today's Nazar 10 Sep episode starts with Ansh taking out a wooden Trishul from his cupboard along with bow and arrow.

Ansh wants to start the search for his children while Piya says they should start from the ocean. They reach near the ocean and see a burning island.

Nishant proposes to give a shot in bringing back their powers. He takes them to the den of first Ikaayan. The Ikaayan says the powers can’t be regained.

Piya deduces he is talking about Shalaaka. They decide to use her sword to stop themselves from sacrificing their powers in the past.

Piya first stabs Ansh with Shalaaka’s knife and then stabs herself. They reach back in time and Ansh says they should sacrifice their powers.

Piya touches the bangle she has taken and remembers they can’t lose powers. She reminds Ansh as well and both decide to keep their powers.

They are about to leave when Ansh’s wings fall in the well along with Piya’s knife. They return and get disappointed while Piya decides to pray to Lord Ganesh.

Guru Maa read something and informs Nishant that they should get ready for the war.

© Copyright tellybest.com, 2018 & 2019. All Rights Reserved. Unauthorized use and/or duplication of this material without written permission from tellybest.com is strictly prohibited.
Cached Saved on: Thursday 30th of January 2020 10:28:50 PMCached Disp on: Sunday 23rd of February 2020 10:22:25 PM