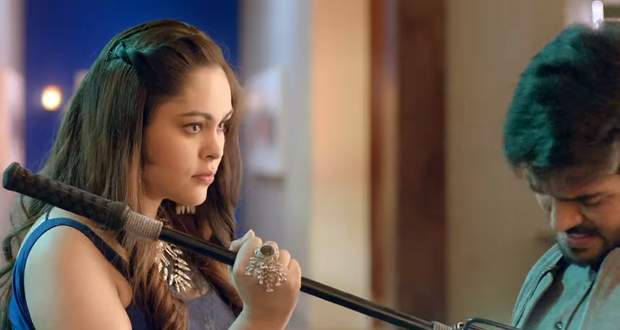 Today's Nazar 11 Dec episode starts with Piya searching for a way to bring back her powers. She gets emotional after finding the shoes she bought for Pari.

At the same time, some snakes arrive at Rathod house. Meanwhile, Naman finds Dilruba doing some rituals and decides to get free of ropes.

Ansh comes into the living room and finds a lot of snakes. They turn into human form and ask for Mohana. At the same time, Mohana arrives in front of Rathod house.

Ansh fights the Sarp family while later he is surrounded by them. Piya also arrives to save Ansh while Sarprani attacks Ansh.

Vedashree sees Mohana and asks her to leave. She wants to take Pari while Vedashree tries to stop her. Vedashree gets unconscious and Neel Heem starts melting quickly.

Piya and Ansh try to make the Sarprani believe that Mohana is their enemy as well. They see the melting Neel Heem while Mohana takes Pari with her.

Piya thinks the Sarp family has kidnapped Pari. Vedashree gets conscious and reveals that Pari is kidnapped by Mohana. Meanwhile, Mohana reveals she will get something special the next day.

Dilruba tries to tell her plan while Naman doesn’t listen to her. He wakes up in a jungle tied upside down. Meanwhile, Sarprani and Ansh join hands to search for Mohana.

Upcoming Nazar episode update: The Sarprani attacks Piya and she gets unconscious.