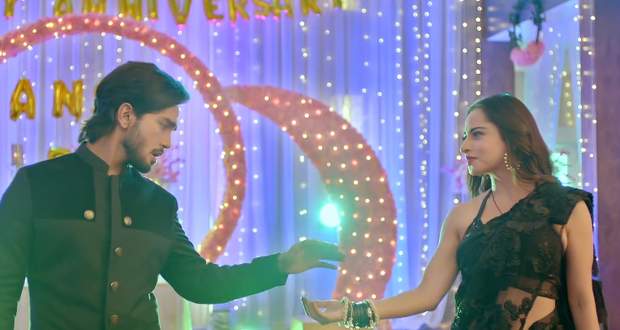 Today's Nazar 11 Oct episode starts with Ansh trying to heal his wound. He fails to do so and again get a shock by touching Piya. Meanwhile, Naman and Sanam also tag along with Nishant and Saavi for the party.

Ansh gives a beautiful necklace to Piya but she is afraid he might get shocked again. Piya is confused about the reason for the shock.

Later, Ansh and Piya get a surprise from the family members for their anniversary. Ansh has to bear the shock at the party especially while cutting the cake.

Piya tells Nishant about the situation and wonders why it is happening again. Meanwhile, the same man who emerged from the mountains hypnotizes Piya’s cousin in believing he is her fiance.

He does it to get into the party. Piya and Ansh dance with each other without touching each other while the man has entered wearing a mask.

The man creates a crack in the floor just between Piya and Ansh. The man tells his name as Dev and he has entered as Ruchi’s fiancé.

Dev tries to get close to Piya while she is shocked by his behavior. Meanwhile, Nishant and Saavi try to find out the reason for Ansh getting shocks.

Nishant sees the reaction of the handprint on Daayan Rahasya and says Piya has Devik Raksha Kavach Dravya.

The plants start glowing at Rathod's house while Naman is asked to find anything suspicious there. Sanam finds Devik Raksha Kavach Dravya in the hall.