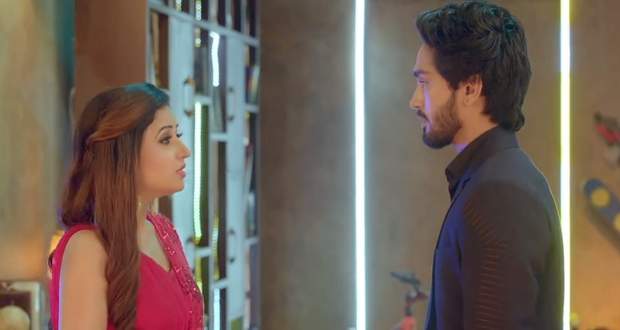 Today's Nazar 12 Aug episode starts with Urvashi transforming into her true form. They all get scared and want her to leave. Urvashi says she wants to have a kid with Ansh for a special mission.

Ansh says he will never marry her after knowing her true form. Urvashi sings a song and uses her powers to manipulate the Rathod family.

The whole family forgets everything but Urvashi realizes she has not used her magic on Adi. Ansh goes into his room to meet Adi.

Adi tells that he is afraid of Urvashi and calls her a monster. He tells him he has seen her fly and breathing out the fire but Ansh doesn’t believe him.

Urvashi comes in the room and Ansh tells her he needs to wait till Adi’s mood gets better. Later, the police come and give the belongings of Gajraj pandit to Avinash.

They say most items contain the name of Ansh and Aditya. They open the box but can’t understand the things written on papers.

Vedashree takes the box to Nishant to get the answers. She is confused about black powers attacking them again. Piya decides to not meet Vedashree but gets worried for Adi and decides to meet him.

Naman starts talking to Sanam who is still unconscious. At the same time, Sanam’s seventh bangle starts developing and she gets conscious.

She can’t remember anything and refuses to recognize Naman and Guru Maa. She says she is hungry and wishes to eat them.