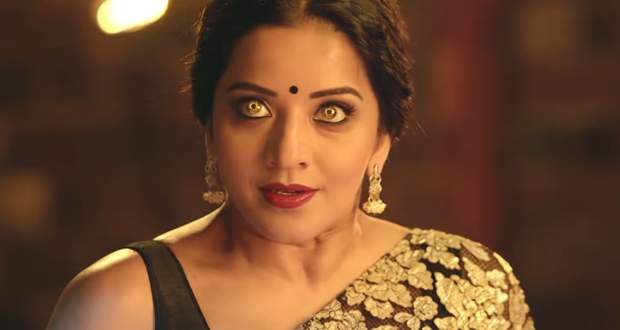 Today's Nazar 13 Jan episode starts with Mohana finding the place where two moonlights meet. Prathmayan’s braid is also present there while at the same time, Ansh and others arrive there.

Mohana gets shocked to see her duplicate. However, it is Barkha who has taken the avatar of Mohana and tries to prove her identity.

Mohana believes that it is an illusion created by Nishant and throws a big rock at her. However, Piya has asked Adrishi for help and Barkha throws the rock away with his help.

Prathmayan wants both of them to prove who the real Mohana is. Mohana challenges Barkha in climbing the wall while Barkha does it with Adrishi’s help.

Prathmayan refuses to give the Chaand Ras to Mohana and asks her to prove. Prathmayan decides to find the real Mohana and creates a Chand Ras Wall.

The real Mohana can easily pass while the fake one will burn. Ansh and Piya emerge from behind and ask Mohana instead of Barkha to not sacrifice.

They show in front of Prathmayan that Mohana is fake. Mohana tries to take the Chaand Ras but Adrishi brings it in front of Barkha and spills it.

There is a huge explosion while Naman finds Dafli at home. Elsewhere, the whole place has burnt to the ground and Nishant finds out that Adrishi’s hands are visible.

Upcoming Nazar episode update: Nishant finds footprints of five people who must have taken the cup.

© Copyright tellybest.com, 2018 & 2019. All Rights Reserved. Unauthorized use and/or duplication of this material without written permission from tellybest.com is strictly prohibited.
Cached Saved on: Tuesday 31st of March 2020 07:45:29 PMCached Disp on: Wednesday 1st of April 2020 04:53:54 AM