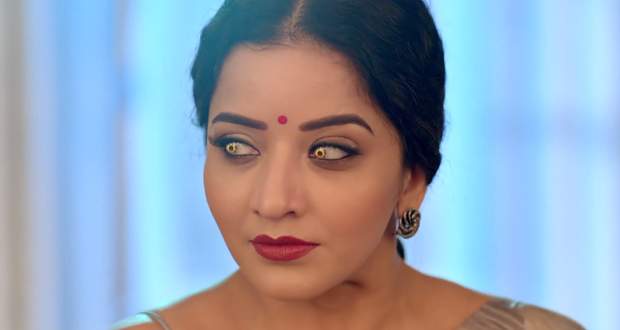 Today's Nazar 13 Nov episode starts with Ansh asking Piya to handle Adi and Pari’s fight. Piya reveals she has not brought the doll while Avinash and Shekhar show Piya the CCTV footage.

At the same time, Chaitali sees the doll walking towards their room. Ansh rushes to stop the doll while later everyone searches for it.

Chaitali again asks Piya to take help from Mohana. Meanwhile, Mohana dances in rain in front of Angad while hiding her one eye.

Panditji tries to put holy water on the ashes but the black powers try to get protected. At the same time, Angad says he can’t wait any longer and wants to ask for her hand.

Ansh and others learn that the doll is inside the room where ashes are kept. Meanwhile, Mohana offers to help Piya and reveals her plan.

The doll reaches the ashes and gets destroyed. Ansh feels devastated while later Piya reveals that Adi and Mohana have saved the ashes.

Naman gets trapped in Chota Pehalwaan’s plan wherein he changes all black powers into gold. Later, Mohana reveals the doll went to the container because it had her diamond eye.

Mohana puts her other eye back in place. Meanwhile, Saavi and Sanam arrive and put gold on the evil people to make them alive. Naman arrives at Nishant’s place with Chotu Pehalwan’s stick. He decides to use the stick to separate Vedashree from Daayan Jod.

Upcoming Nazar episode update: Nishant offers a plan to bring Vedashree back but needs Prathmayan’s hair for the process.

© Copyright tellybest.com, 2018 & 2019. All Rights Reserved. Unauthorized use and/or duplication of this material without written permission from tellybest.com is strictly prohibited.
Cached Saved on: Saturday 1st of February 2020 10:36:18 AMCached Disp on: Sunday 23rd of February 2020 07:49:34 AM