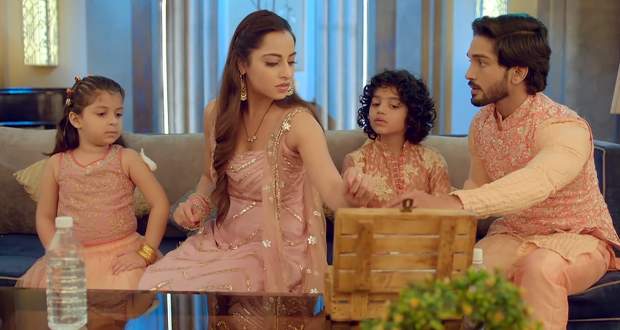 Today's Nazar 13 Sep episode starts with Bhasmika throwing the Panchtatva Dravya in the sea using her braid. Piya thinks she can use five elements from anywhere and will need Ansh and Pari’s help.

She decides to trick Bhasmika by praising her powers. Ansh and Pari try to deduce Piya’s trick. Later, Piya uses her powers to put water on the Mandap.

Ansh uses his wings to create wind while Pari thinks of using earth. Meanwhile, Naman gets worried to see Sanam turning into ice.

Pari also uses her powers to attack through the earth. Later, Bhasmika says they can’t beat her as they can’t create fire.

Ansh and Piya remember Adi is capable of creating fire. Bhasmika mocks Adi which makes him angry and he creates a circle of fire around her.

Rathods pray to Lord Ganesha for help while a Ganesh idol forms in the sky to help Piya and Ansh. Ganesha attacks from the sky and Bhasmika burns into ashes.

At the same time, Naman circles various candles around Sanam to cure her. She gets well and stops Naman from going.

Later, Ansh and Piya reach home with their kids. Both of them treat the wounds of their kids and later Piya decides to leave with Pari.

Upcoming Nazar episode update: Piya is about to leave with Pari when Ansh stops her.

© Copyright tellybest.com, 2018 & 2019. All Rights Reserved. Unauthorized use and/or duplication of this material without written permission from tellybest.com is strictly prohibited.
Cached Saved on: Tuesday 7th of July 2020 05:46:20 PMCached Disp on: Wednesday 8th of July 2020 02:07:07 PM