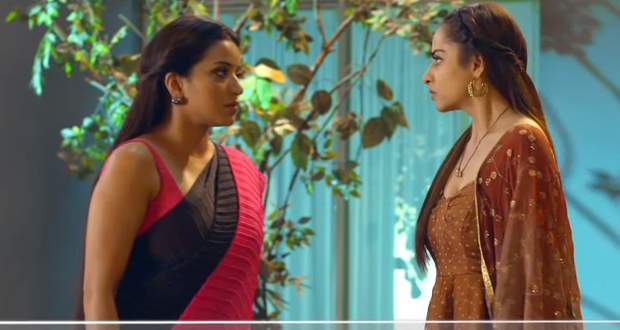 Today's Nazar 14 Feb episode starts with Ansh asking Piya to not trust Mohana. Piya tries to convince him in believing that Mohana’s situation might affect them as well.

Ansh asks Piya to promise him that she will not let anything happen to herself. Later, Piya takes Mohana in an open area to bring the challenger.

The ball of fire comes and doesn’t hurt the Rathods and Mohana. The ball of fire approaches their building and destroys their house. Ansh is attacked while Piya wants a guarantee that Mohana will stop attacking them after being saved.

Mohana wants Piya to bind in a blood promise to do their parts of their deal. Piya decides to do this to save her family from Mohana and the other evil power.

If they are unable to fulfill their part of the deal, they have to face death. Meanwhile, Panditji learns from Prathmayan that Mohana burnt cave and dried the Uttar Jheel.

Panditji wants to tell Vedashree and Nishant about Mohana’s intentions while Piya and Mohana start the rituals of Rakt Vachan binding. Ansh warns family members to not believe Mohana.

Ansh stops Piya from binding in the Rakt Vachan while Panditji wants to warn the Rathods. Mohana is hiding that Ansh is the challenger who she is afraid of.

She drops Panditji off the balcony and Piya arrives. Panditji calls Piya but is unable to speak because of Mohana’s braid.

Upcoming Nazar episode update: Piya gets bind in the Rakt Vachan with Mohana.

© Copyright tellybest.com, 2018 & 2019. All Rights Reserved. Unauthorized use and/or duplication of this material without written permission from tellybest.com is strictly prohibited.
Cached Saved on: Sunday 5th of April 2020 03:00:29 AM