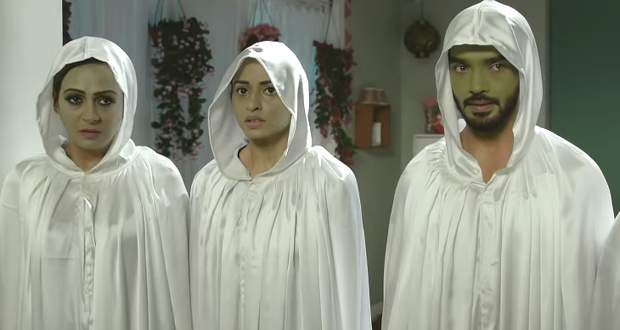 Today's Nazar 15 Jan episode starts with Piya telling the creatures that Barkha is not Mohana. The Chandraveshis continue to ignore Piya and go missing with the moonlight and Barkha.

They find the Chandraveshis walking down the building and at the same time Pari takes the Pyala using her braid. The Chandraveshis start coming back while Nishant calls the Rathods.

Nishant reveals that as soon as the moon goes down, the Chandraveshis will also leave. They leave Barkha and stop the moon from going down.

The Chandraveshis touch Pari and make her face appear green. They hypnotize Barkha as well and she also turns green. Meanwhile, Naman makes a sketch to reach the place indicated by Sanam.

The Rathods decide in the house as the lift takes too long. Elsewhere, Naman’s drawing is very poor and Dafli takes him to many weird places.

The Rathods lock themselves in a room while Chandraveshis thump their door. Piya and Ansh decide to confuse them by dressing up exactly like Chandraveshis.

Meanwhile, Naman makes Dafli hold the Kada so that she can take him to the cave. In the cave, Naman is not able to find Sanam.

The Chandraveshis enter the room and can still smell the Rathods. Piya uses the deodorant on everyone to hide their body smell.

Upcoming Nazar episode update: Piya realizes that the Chandraveshis are after Ansh instead of Barkha.

© Copyright tellybest.com, 2018 & 2019. All Rights Reserved. Unauthorized use and/or duplication of this material without written permission from tellybest.com is strictly prohibited.
Cached Saved on: Friday 17th of January 2020 07:16:51 PMCached Disp on: Wednesday 22nd of January 2020 04:05:21 AM