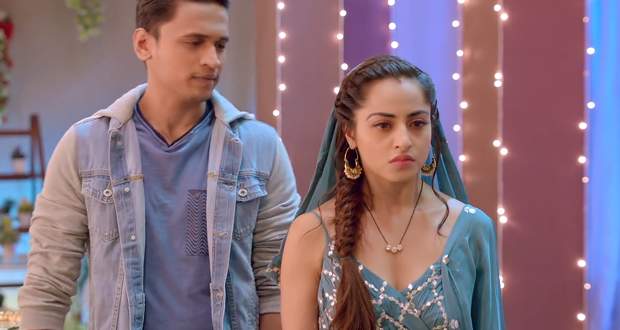 Today's Nazar 16 Oct episode starts with Ansh falling on the bed in a weak condition. Meanwhile, Naman is worried to meet Sanam’s mother and is scared also.

Dev says nature is keeping Ansh and Piya away as two Deviks have met with each other. He further says he helped Piya’s mother in catching evil powers.

Piya wants Dev to leave while Dev says the connection will not break. He wants Piya to leave Ansh. At the same time, Nishant and Saavi decide to find out the past of Dev.

They decide to ask the creatures which Divya had captured. Later, Piya doesn’t want to leave Ansh and him to support him in a difficult time.

In the morning, Piya eats the Sargi and does the Pooja as she is keeping Karwa Chauth fast for Ansh. Dev again confronts Piya and wants her to leave Ansh.

Piya is adamant to keep the fast and stay with Ansh. The lady with glowing eyes comes and Dev reveals how she sprinkled the Raksha Kavach on plants that were touched by Piya.

The lady puts Mehendi with Devik Raksha Kavach Dravya on Piya’s hand. Dev says Ansh will get hurt with even Piya’s one stare.

Nishant asks Adi to send a picture of Dev to him.