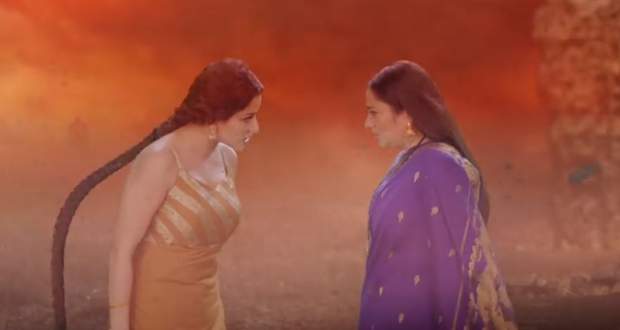 Today's Nazar 1 Aug episode starts with Divya giving the sword to Piya before dying. The sword produces a lot of electricity and Divya says the war has started and Piya has to end it.

Ansh gets conscious after Divya’s death. Nishant takes the sword from Piya and puts it in the ground. At the same time, Mohana comes with the army of the dead.

Nishant tells Piya to come with him but the earthquake tries to stop them. Meanwhile, Sanam and Naman wonder what they should do with the precious stone.

Mohana arrives with a lot of zombies and Dola. Piya doesn’t want to fight the Great War. Saavi and Nishant get ready to fight and urge Piya to pick up the sword.

The army of the dead surround Saavi and Nishant and put arrows in them. Ansh also attacks the zombies.

Piya tries to protect Vedashree while Ansh gets trapped by Mohana and Dola. Panna attacks Piya with her coins but Ansh protects her. Ansh gets weak but says Piya has to fight the war and win it.

Naman and Sanam decide to put their plan in action while Mohana again tries to manipulate Vedashree. Later, Piya declares aggressively that she will fight the war.