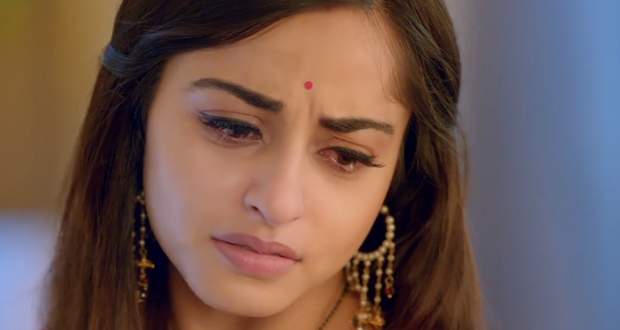 Today's Nazar 1 Jul episode starts with Everybody getting happy with Vedashree recovering. Vedashree wishes to play with Adi but Piya comes and snatches Adi from her.

Piya blames Vedashree to be sister of witch. Piya wishes to leave with Ansh and Adi. Everybody is shocked to see Piya push Vedashree away from Adi.

Everybody is shocked to see Piya’s behaviour. Piya bashes everyone for being stupid especially Avinash. Piya tells Ansh to choose either his family or his wife. She feels helpless for doing all this.

Everybody pleads Piya to not leave as she is very important for the family. Ansh tells Piya to leave without Adi. She accepts it as she has to leave to save Vedashree.

Meanwhile, Saanvi and Nishant follow Mohana to get the energy cup in a jungle.

Everyone is devasted with Piya leaving. Ansh relives all his memories of Piya. They all see her leave in the elevator while Vedashree gets unconscious.

Mohana is well aware about somebody following her. She creates a cloud of fog to divert Prashant and Saavi. Saavi sees footprints of Mohana and they both start following them.

Prashant and Saavi reach a deserted place following the footprints. They find the place weird and Prashant says the place is called witch-island. He also states that the island floats on air rather than water.

Mohana is amused to see both of them get trapped in her plan from above.

Ansh tries to stop Adi from crying but fails. Ansh and Piya are both heartbroken from getting away from their love.  Piya claims now Mohana has to do what she promised as she has done her end of the bargain.

© Copyright tellybest.com, 2018 & 2019. All Rights Reserved. Unauthorized use and/or duplication of this material without written permission from tellybest.com is strictly prohibited.
Cached Saved on: Saturday 6th of June 2020 08:32:09 PM