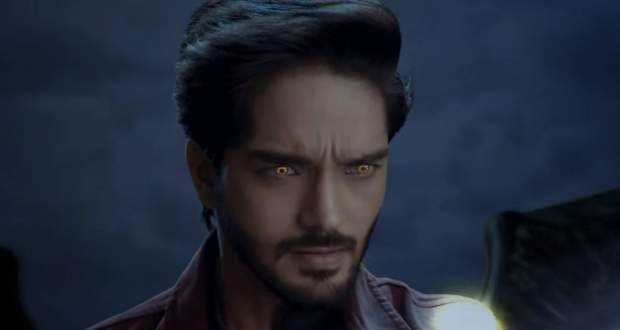 Today's Nazar 21 Nov episode starts with Piya giving a chance to Angad to tell his story. Angad reveals that he found the horn in the moonlight and it got stuck on his head.

He also says that he changes every time he comes in contact with moonlight. Meanwhile, Nishant learns that it is Mesh Poornima and knows it is not a good sign.

Piya accuses Angad of trying to kill Mohana while Angad says he loses control in the presence of moonlight. He further says only Mohana can help him get cured.

Angad says he will be saved from the curse of Singha when he marries an Ekaayan on Mesh Poornima. He further says the curse will be transferred to the one who has the horn of Singha in the moonlight.

Sanam sends her bats to stop the moonlight from reaching Ansh. Meanwhile, Angad says Ansh will also be saved if he gets married to Mohana.

Piya arranges the wedding for Angad so that Ansh can be saved. Piya also has to make sure that moonlight doesn’t fall on him during the wedding.

Later, Sanam learns that Ansh is in danger from the bats and they decide to save him. Meanwhile, Mohana and Angad perform wedding rituals.

Sanam finds Ansh in an unconscious state while Nishant and Saavi learn from Prathmayan that Singha‘s curse can’t be broken.

Also, she says that after killing Mohana, Singha will not need moonlight and will live all eternity.

Upcoming Nazar episode update: Angad turns into Singha as the moonlight falls on him during the wedding.