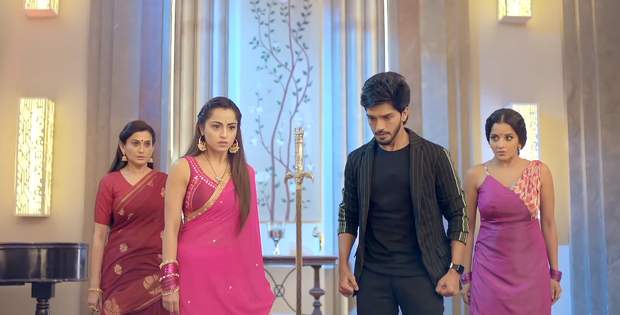 Today's Nazar 22 Jul episode starts with Mohana breaking the wall to take out the sword. Ansh and Piya try to stop them and say they can’t get it out of the stone.

Ansh tells Piya to get the sword out as it will not harm anyone. She tries to get it out but fails.

She asks Ansh to get the sword out but he also fails. They all think sword is not meant to get out of the stone. Suddenly, Adi comes and gets the sword out.

The sword charges in a direction and Nishant instructs everyone to stay away as humans can’t tolerate its magnetic power.

Ansh deduces both Daayanvanshi and Reevavanshi are equally strong while Divya and Mohana declare the war is inevitable.

Both of them manipulate their off-springs in using the sword. Ansh and Piya try to stop their mothers from starting the war.

Mohana says she has sent Panna to get the precious stone to end the war.

Meanwhile, Sanam says the combining of the three stones is not a good sign. She tries to break them apart but fails.

Mohana and Divya still continue to argue about who will win the war. Ansh and Piya take advantage of the situation and fly away with the sword.

Later, Guru Maa discovers only she can touch the stone and takes it away from Sanam, Naman, and Panna.