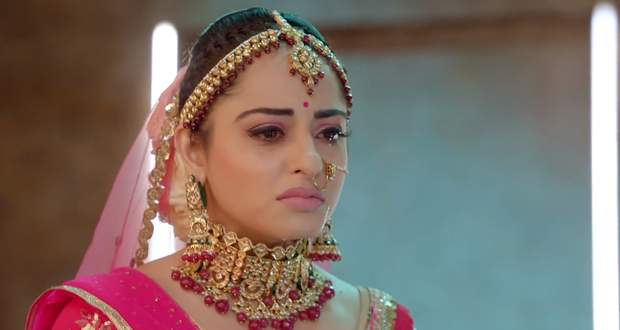 Today's Nazar 22 Oct episode starts with Piya asking about Nishant from Panditji. He assures her that he will try his best to delay the wedding. Vedashree wants Panditji to do the wedding as soon as possible.

Pandit tries to stall time and waits for Nishant. Piya sees her aunt and Ruchi and decides to stop them from coming inside the home.

She sees them enter the lift but later finds the lift empty with only shopping bags. Later, Panditji creates fire on purpose while Rathods keep repeating Dev will get angry.

Piya gets shocked to see Dev bringing the Mandap in its original form so quickly. Meanwhile, Sanam’s mother doubts Naman and Saavi of being a Chudail.

Nishant reaches Rathod house with a box but is unable to enter the building. Piya enquires about the kids but Dev has trapped them in the room.

Nishant tries to find a way to enter the building while Piya wishes to see Ansh for one last time before marriage. At the same time, Sanam’s mother wants Saavi and Naman to fly in the air.

Piya goes in Ansh’s room and finds a clue against Dev. She finds Ansh’s phone near the terrace while Dev sends the Rathods to get Piya.

Piya uses her powers to get the phone and find out what Ansh wanted to say. Meanwhile, Saavi attacks Sanam’s mother but Sanam comes in between.

Upcoming Nazar episode update: Piya hides in her room and hears to recording in Ansh’s phone.