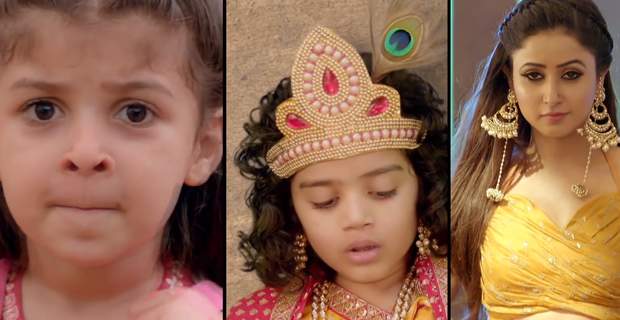 Today's Nazar 23 Aug episode starts with Mohana comparing Adi’s condition with Karan. Ansh says he will marry Urvashi when Adi will be happy with the marriage.

Meanwhile, Piya gets worried to see Pari unable to control her powers. Pari enquires how she can help anyone with her powers.

Mohana tells Urvashi to use some brain and make Adi happy with the marriage. In the morning, Rathod family starts preparing for the Janmashtmi celebration.

Adi dresses like Lord Krishna and asks Ansh to tie Pari’s Rakhi. At the same time, Piya and Pari also do the Aarti of Krishna.

Vedashree tries to feed butter to Adi but he runs away.

Piya leaves Pari with Guru Maa while Pari decides to help her friend. Later, Urvashi again tortures Adi by hanging him off the balcony.

She further blackmails him and says she will save him on one condition. She wants Adi to tell Ansh that he is ready for the marriage.

Pari decides to go at Adi’s place in an auto. She reaches the address and wonders where Adi lives. At the same time, Rakhi from Adi’s hand falls straight to the ground near Pari.

Pari sees Adi in danger and decides to help him. Meanwhile, Naman is still worried about Sanam but refuses to take help from Reevavanshis.

He gets a message from Nishant and Saavi in the form of a bow and marrow image in the sky.

Upcoming Nazar episode update: Mohana and Urvashi get shocked to see Adi coming out of the lift.

© Copyright tellybest.com, 2018 & 2019. All Rights Reserved. Unauthorized use and/or duplication of this material without written permission from tellybest.com is strictly prohibited.
Cached Saved on: Friday 31st of January 2020 01:02:43 AMCached Disp on: Tuesday 18th of February 2020 04:33:09 AM