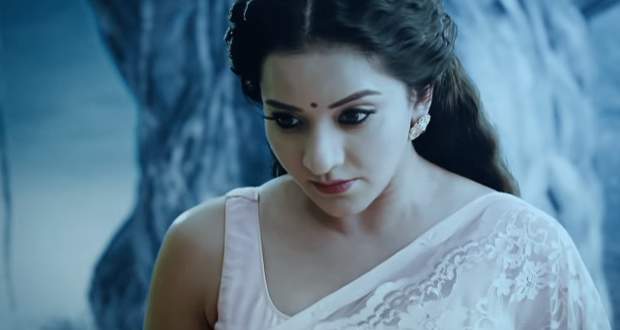 Today's Nazar 23 Jan episode starts with Piya getting worried about Ansh’s wounds. Nishant asks the Rathods to keep Ansh away from sunlight and keep him in cool places.

Ansh apologizes to Piya for keeping her busy while she can’t meet her brother. At the same time, Aayush wakes up and finds various evil powers outside his window.

Saavi and Naman act of getting engaged while Sanam is not happy with their closeness. Elsewhere, Aayush is brought in front of Mohana and is unconscious.

Aayush gets angry at Mohana and wants to attack her while she traps him using tree branches. Mohana tries to entice him against the Rathods.

She also accuses Nishant of not finding Aayush and also poisons his mind against Piya. Later, Piya tells Nishant that Ansh is sweating even after being in a cold room.

Nishant has a plan while elsewhere, Naman and Saavi get fake engaged. Meanwhile, Nishant puts Ansh in the depths of an ocean to cure him.

He also asks Piya to collect the remains of Do Chaand Raat Ras in a bottle. She collects the remains but leaves the bottle when she sees Ansh. The remains escape the bottle.

Mohana asks Aayush to become the king of evil powers and at the same time, the remains enter him. Meanwhile, Saavi supports Naman and wants to help him.

© Copyright tellybest.com, 2018 & 2019. All Rights Reserved. Unauthorized use and/or duplication of this material without written permission from tellybest.com is strictly prohibited.
Cached Saved on: Sunday 29th of March 2020 04:46:21 PM