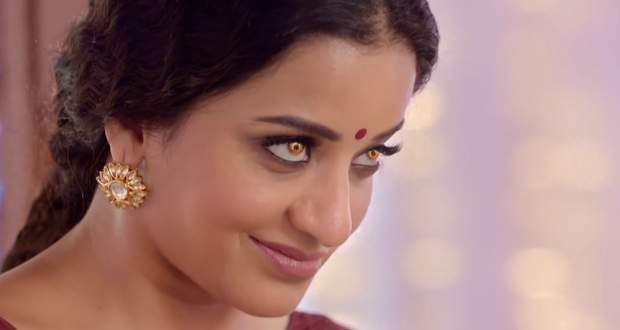 Today's Nazar 23 Oct episode starts with Piya hiding in the room and listening to the recording. Later, Dev finds Piya behind the counter while Pari and Adi escape from the window.

Nishant meets Adi and Pari while Piya decides to do some more acting. Adi makes a tunnel for Nishant and Pari to cross the invisible wall.

Piya asks for help from the goddess while Dev is desperate to get married. Meanwhile, Saavi attacks Sanam’s mother but Naman comes in between.

Sanam’s mother gets angry to learn that Naman is a human. At the same time, Dev is about to tie the Mangalsutra when Mohana arrives in Rathod house.

Piya learns that Nishant has brought Mohana to beat Dev. Meanwhile, Sanam’s mother saves Naman’s life by using one of her necklaces.

Dev is confident that he can’t be beaten by any Daayan while Mohana is adamant to stop Dev. She attacks Dev but Dev attacks her back.

Mohana gets shocked while Piya reveals that Dev also has black powers. Piya also makes everyone hear the recording while Ansh wakes up.

Ansh decides to take energy from the Daayan tree to fight with Dev. At the same time, Naman learns that he has turned into a Chudail.

Upcoming Nazar episode update: Mohana and Piya team up with Adi, Pari and Ansh to fight against Dev.

© Copyright tellybest.com, 2018 & 2019. All Rights Reserved. Unauthorized use and/or duplication of this material without written permission from tellybest.com is strictly prohibited.
Cached Saved on: Thursday 30th of January 2020 06:41:48 PMCached Disp on: Thursday 20th of February 2020 07:55:53 PM