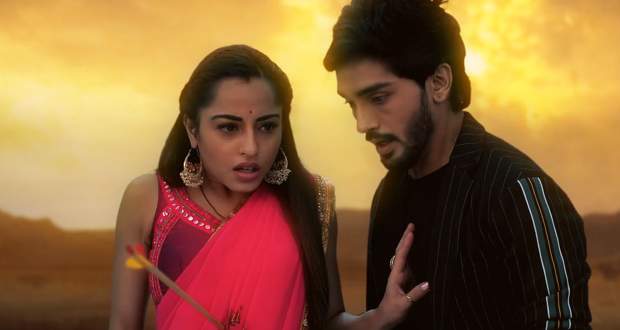 Today's Nazar 25 Jul episode starts with Piya and Ansh falling in a pit. They wonder why their powers are inactive there. They see many human skeletons in that place.

The skeletons get alive and are ready to attack Piya and Ansh. They start fighting the skeletons.

Meanwhile, Vedashree discovers that Mohana and Divya have taken Adi along with them. They try to trace Ansh, Piya and Mohana but are unable to succeed.

Nishant declares that Ansh and Piya have to fight the three powers alone.

Ansh and Piya successfully wipe out the skeletons together. They reach the Patal Agni falls and find Mohana and Divya there.

Divya warns both of them to give the sword. When Piya denies, Divya attacks Ansh but Piya comes in between and gets wounded.

At the Rathore house, everybody starts worshiping the goddess for Ansh and Piya’s safety.

Piya realizes that everything is just an illusion to stop them. It is just to stop them from destroying the sword.

Mohana and Divya disappear along with the arrow in Piya’s stomach.

Guru Maa comes to a temple, followed by Naman. Guru Maa realizes that it’s not Naman but Sanam.

Upcoming Nazar episode update: Piya wonders what her mother has planned while Divya is preparing for war with the sword.