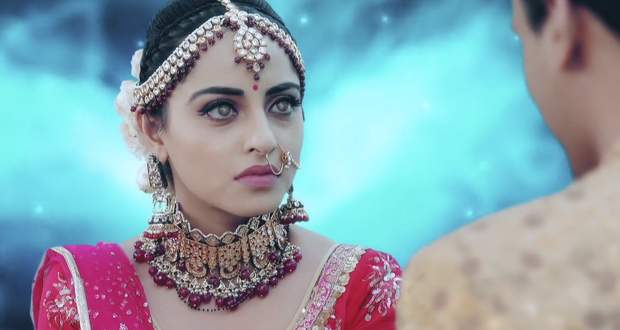 Today's Nazar 25 Oct episode starts with Rathods surrounding Piya while Vedashree attacking her. Piya decides to manipulate Dev while Ansh attacks him but Dev is way too fast and escapes with Piya.

Ansh and Mohana along with kids decide to find Piya. Meanwhile, Nishant and Panditji are trapped by the Rathods who don’t let them go.

Ansh decides to use fireflies to reach Piya. He reaches a cave while Vedashree tells Nishant that when Dev will tie black necklace around Piya, she will also believe him.

Ansh is unable to enter the cave as he has Daayan blood. Piya gets conscious and tries to attack Dev but fails. Piya is also unable to see Ansh.

Nishant decides to send a message to Ansh through Adi that Piya must not look Dev in his eyes. Adi tells Pari while Prai tells Mohana.

Later, Mohana tells Ansh and tries to enter the cave. Dev turns Piya into ice and decides to tie the Kalasutra in her neck instead of other rituals.

Ansh and Mohana fail to enter the cave while Dev ties the Kalasutra. Piya looks in Dev’s eyes and he can easily control her.

Upcoming Nazar episode update: Piya decides to marry Dev while Ansh is unable to stop her.