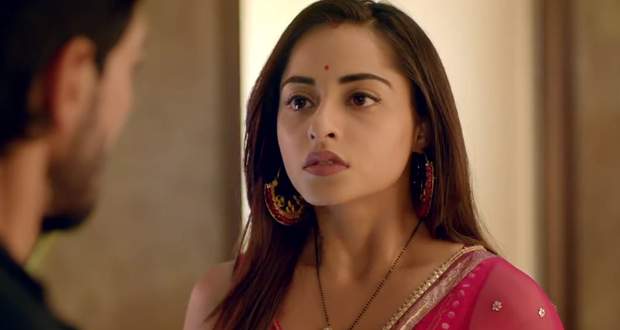 Piya tells Mohana she will do anything she says.

Mohana asks Piya to leave Ansh and that too by breaking his heart. Piya agrees.

Doctor says Vedashree can go home and she is recovering.

Piya again talks rudely to Ansh and tells him she can’t stay glued to his family.

She tells him she wants a separate home.

Shekhar tells Ansh and Piya not to mention the details of the incident to Vedashree.

Vedashree tells Piya that she remembers everything and it is not Piya’s fault.

Vedahsree also tells Piya to not blame herself and forget everything.

Piya says to Vedashree that it was stupid of her get bound with Mohana.

Piya also says that she is there to solve their problems.

She comes out of the room and starts crying.

Guru Maa tells Naman that her sister is afraid of Sanam that is why she was hiding.

Sanam starts hitting Mausi as she took her chutney.

© Copyright tellybest.com, 2018 & 2019. All Rights Reserved. Unauthorized use and/or duplication of this material without written permission from tellybest.com is strictly prohibited.
Cached Saved on: Tuesday 28th of January 2020 01:17:30 AM