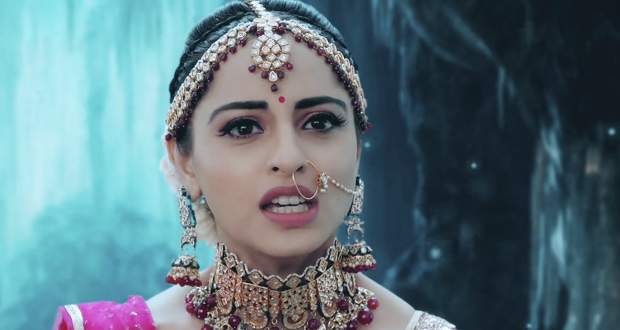 Today's Nazar 28 Oct episode starts with Ansh and Mohana entering the cave of Dev. Dev declares Piya's powers have increased and ask her to attack Ansh and Mohana to test her powers.

Ansh tries to console Piya in not choosing the wrong path while Piya attacks him. Piya says it’s fun to have so many powers.

Piya is happy to get evil while Ansh still believes Piya is doing drama. Piya decides to marry Dev to break her relation with Ansh.

Piya puts flower garland in Dev’s neck and later attacks him using her powers. Meanwhile, Rathods feels weird when they come to senses.

Dev is confused as to why he was not able to control Piya while she says she always listens to the heart. She removes the Kalasutra from her neck.

Dev turns of ice in the cave. Meanwhile, Sanam is worried as Naman has gone to Koopcha Pehalwaan who turns everyone into jewelry.

Piya and Ansh return to Rathod house and Rathods apologize to Piya. Their happiness is soon spoilt by the arrival of Mohana.

Nishant tells that Mohana will stay in Rathod house in return for helping them in beating Dev. Rathods get worried while Mohana warns them about the future.

Upcoming Nazar episode update: Chaitali finds someone in the dark with yellow eyes.