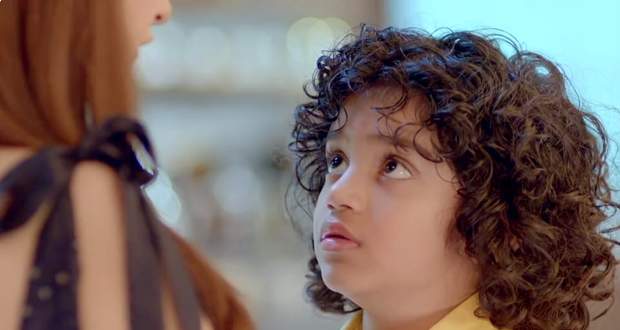 Today's Nazar 29 Aug episode starts with Adi and Pari talking about how nice it will be if their parents stayed together.

In the meantime, Ansh wants to give chocolate to Adi before he goes to bed.

But when he entered the room, Adi pretends to be sleepy. So Ansh leaves the room.

Later he realizes that he forgot to give chocolate and when he comes back, he mistakenly talks to Pari thinking that it is Adi.

He talks emotionally that he will take care of  Adi as a father and mother.

At the same time, Mohana questions Urvashi about why Ansh is marrying Urvashi and that too the same week itself.

Now, Adi & Pari make plans to stop the marriage and discuss about how to bring Urvashi’s original face in front of everyone.

Meanwhile, Naman discusses with his mother about how to bring Sanam from Chudail form to normal.

His mother and others explain that if he can bring the love back again between them, it is possible to bring her back to normal.

In the meantime, Ansh feels that Piya is still with him and not gone away from him at all.

Meanwhile, Adi gets the bottle which can make Urvachi reveal her evil form.

But Urvashi threatens Adi not to expose her until the marriage happens.