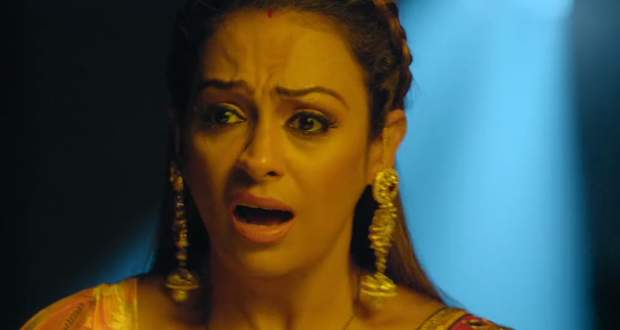 Today's Nazar 29 Oct episode starts with Ansh and Vedashree getting worried for Mohana being in the house. Piya says if she stays in the house, they can keep an eye on her.

Meanwhile, Mohana can see a Daayan living in the house next door and is sure she helped Dev in escaping with Piya.

Naman reaches in the jewelry shop told by Sanam and gets shocked to see so much gold. Later, Chhota Pehalwan turns Naman into gold.

Mohana sees the smoke going into the neighbor’s house and decides to go there. She is stopped by Pari’s braid.

Meanwhile, Chaitali goes to light the oil lamps and decides to wish the neighbors. She finds the house empty at first but later sees a Daayan who looks exactly like Vedashree.

The twin sister says she will use Vedashree’s family members to get to her sister. The Rathods also enter the neighbor’s house but find only Chaitali.

The real Chaitali is trapped by Vedashree’s sister and an impersonator goes in with Rathods in their house. Meanwhile, Sanam and her mother find Naman in a statue form.