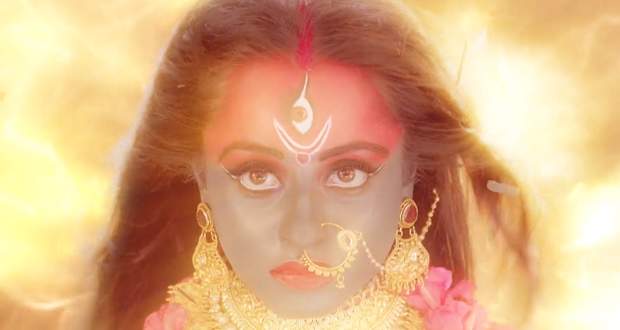 Today's Nazar 2 Aug episode starts with Piya declaring if everyone wants the war then she is ready. Naman helps Nishant and Saavi from the zombie attack. Nishant enquires about the Trikon Mani.

Naman tells Sanam has the precious stone. Nishant gives the sword to Piya and she starts killing the zombies.

Sanam tries to give the stone to Piya but Mohana snatches it from her. The stone gets away from Mohana and she again tries to take it in her possession but Ansh stops her.

The stones approach Piya and enter into her forehead. It transforms her into a giant goddess. She breathes fire and kills the army of the dead.

She kills Panna and Dola and attacks Mohana as well. Piya’s transformed look is ready to destroy everyone and Nishant says they need to stop Piya.

Piya approaches Vedashree but Ansh stops her by getting into her feet. She gets soft on seeing Ansh and transforms into her original self.

Later, Piya and the whole family perform the last rituals of Divya. Meanwhile, Naman gets upset with Sanam being in a Coma.

Ansh and Piya decide to sacrifice their powers to save their family from any further problems.

Upcoming Nazar episode update: Ansh and Piya’s children grow up with powers to fight against the evil.

© Copyright tellybest.com, 2018 & 2019. All Rights Reserved. Unauthorized use and/or duplication of this material without written permission from tellybest.com is strictly prohibited.
Cached Saved on: Monday 3rd of February 2020 02:03:38 AMCached Disp on: Tuesday 18th of February 2020 11:44:53 PM