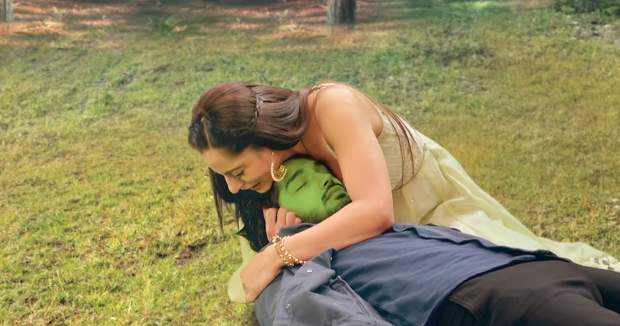 Today's Nazar 2 Dec episode starts with Mohana declaring Ansh can’t leave the Pataal Jheel while being alive. Ansh decides to kill himself to cross the Jheel.

He puts a branch’s pointed end in his chest and falls in the Jheel. Meanwhile, Nishant and Rathods protect the house from the arrow but the Tricone arrow breaks the invisible wall.

Sanam and Naman try to stop the arrow using the big magnet. At the same time, Piya finds Ansh all green and tries to wake him up.

Piya decides to save Ansh by sucking the poison out of him. Ansh wakes up while Nishant and others struggle to save Pari.

Mohana threatens that nothing can stop the Tricone Dhatu. Meanwhile, Nishant and Saavi put some zap on Pari to make her invisible.

The arrow still reaches Pari while Piya and Ansh stop it. Later, Ansh breaks the arrow and Piya tells Ansh about Angad’s reality. She reveals that he was the real Singha.

The Rathods gets delighted to see Pari safe while the Tricone Dhatu joins again. Pari decides to take a photograph of everyone while Trikon Dhatu comes and hits Pari in the back.

Upcoming Nazar episode update: Rathods mourn the death of Pari while Mohana arrives and gets delighted with her successful plan.