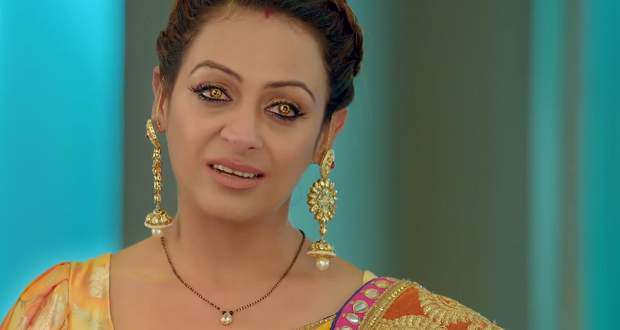 Today's Nazar 30 Oct episode starts with Mohana trying to explain someone is inside the neighbor’s house. Nobody believes her and says Chaitali has seen nobody in the house.

Mohana is suspicious about Chaitali while later find Chaitali as a Daayan. Mohana deduces that a Daayan mirror has been created through which Chaitali’s Daayan version has come out.

Mohana tells others in the Rathod family about Chaitali being a Daayan while nobody believes her. Meanwhile, Sanam and her mother take Naman’s statue from Chotu Pehalwan’s house.

Mohana gets trapped in a magical Chakra by the Rathods. Later, Pari and Adi decide to investigate in the neighbor’s house. Vedashree’s sister decides to punish Pari and Adi for investigating while Daayan Chaitali brings the mirror in Rathod house.

Vedashree’s sister takes Vedashree’s getup and scolds the kids. Later, Avinash looks in the mirror and his Daayan version comes out. Real Avinash gets trapped in the mirror while Daayan Avinash says he will take the kids for a ride in his van.

Chota Pehalwan comes to take Naman as it is his statue now.

Upcoming Nazar episode update: Piya and Ansh deduce that there is a Daayan mirror in the house.