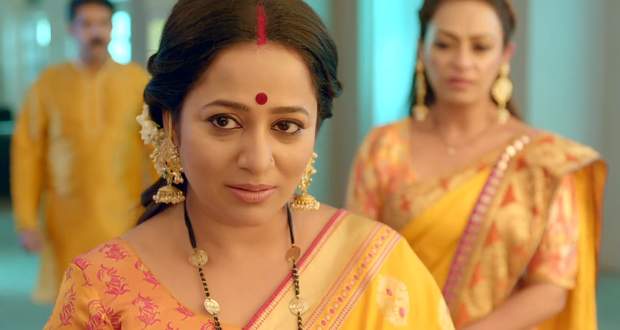 Today's Nazar 31 Oct episode starts with Mohana asking Piya to find a black mirror in the house. Piya ignores her while Avinash, Chaitali and Vedashree’s sister tries to trap the kids.

Nishant is trying to deduce how all the oil lamps extinguished at the same time. He has collected the smoke and does some experiments.

He deduces that the smoke is being used to make a Daayan mirror. He decides to ask Prathmayan about the mirror.

Piya finds the black mirror and stops Avinash and Chaitali from going near it. Vedashree’s sister manipulates the situation and asks Piya to look in the mirror.

Meanwhile, Prathmayan tells Nishant that her daughter has made the mirror. They wonder if it is Mohana but Prathmayan says it is her other daughter.

Ansh stops Piya from looking in the mirror and takes her in private to talk. He tells Piya about the Daayan mirror and Piya says the mirror is in their house.

They think that Vedashree has made the mirror. They deduce Vedashree’s Daayan version is doing it. Vedashree’s sister makes all the mirrors in the house Daayan mirror.

Piya wishes to ask Mohana while later she looks in the mirror of her room. Meanwhile, Nishant tries to deduce who is trapped in the mirror. They learn that Avinash and Chaitali are trapped.

Upcoming Nazar episode update: Ansh learns about Avinash and Chaitali and gets attacked by them.