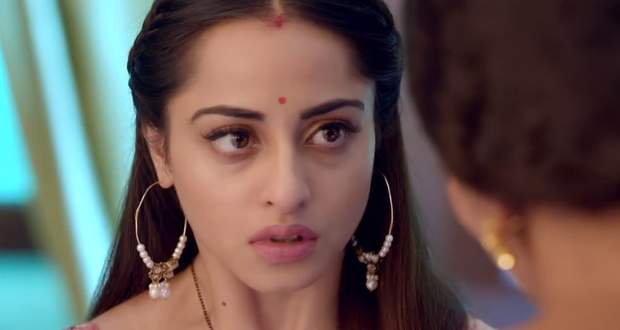 She fails, and Prashant tells her evil spirits are powerful. She again tries using all her concentration and power and succeeds in locating the island.

They all think who can reach the island as it is on height. Piya says only Ansh can do it.

Meanwhile, Ansh is upset with the absence of Piya and starts breaking things. When he sees Piya is calling him, he breaks the phone too.

Prashant is about to try Shekhar’s number when Mohana comes and stops him. She asks why Piya was calling Ansh.

She warns Piya about not contacting Ansh or his family again or else she will kill Vedashree. She further advices her to leave the city.

Piya says she will leave the city on one condition. She tells her she will go only with her son.

Meanwhile, Sanam is delighted to see the treasure in the cave. She thinks if Mausi followed her. Mausiji tries to enter the cave but is stopped by a knife in her shoulder and falls unconscious on the floor.

Mohana agrees to Piya’s condition. She receives an earring from Piya and goes to get Adi. Ansh runs to find Piya upon hearing the voice of her earring.

Mohana comes to take Adi, but he turns into a stone statue. She uses the earring to take Adi.

Meanwhile, Ansh is still searching for Piya but finds Adi is missing. He thinks Piya took Adi and gets angry.

Naman finds Mausi unconscious and thinks Sanam has murdered his Mausi. Sanam says she was in the cave and has not done anything. Naman tells her to swear on tamarind, and she obliges.

Sanam runs away before the police come. Naman gets stuck with answering the police’s question.