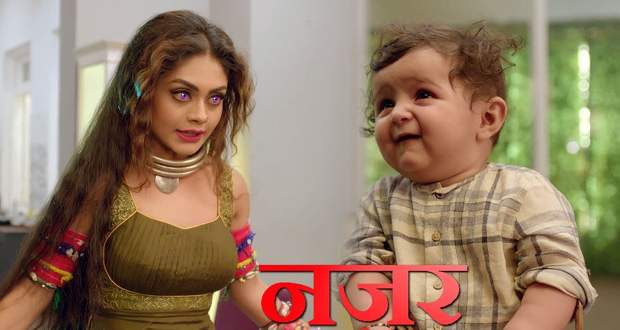 Today's Nazar 3 May episode starts with Mohanna misleading Shalaka about Rahul’s body. Mohanna remembers Ansh’s words where he asked her not to deceive him.

Mayank packs Tara’s stuff. Tara comes there and questions him about the same. Mayank says that he doesn’t want to trouble her more.

Mayank asks Tara to leave him as he feels that now he has recovered from his illness. Tara stares at him.

Shalaka spells Neha and disappears. Neha rushes towards the balcony.

Meanwhile, Tara sends Sanam to meet Naman. Naman gets shocked to see Sanam and addresses her as Dilruba chudail.

Neha begins to jump off from the building. Ansh comes and stops her. Shalaka questions Ansh about Rahul.

On seeing the entire Rathod family, Shalaka comes out of Neha’s body. Neha fails to recall past incidents.

Mayank disappears from Tara’s sight suddenly. Tara feels the touch of someone around her. She sees the footprints and follows them.

Tara comes to a room and sees a stranger there. Tara gets scared, Mayank comes to her but he fails to see anyone.

Shalaka comes in front of Vedashri. Ansh saves Vedashri by forcing her to close her eyes.

The written update of 3 May 2019  Nazar episode full story ends.