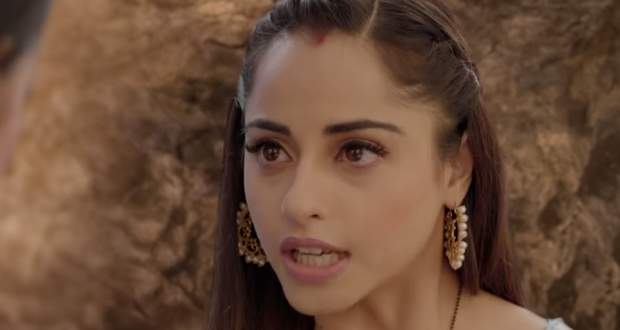 Today's Nazar 3 Oct episode starts with Everybody getting shocked to learn that Pratima is Vedashree’s mother. She insults Shekhar and says Vedashree is her dearest daughter.

Piya doesn’t want Pratimayan to take Pari while Sanam talks about Bhasmika. She is sure that the powers of Prathmayan must be mentioned in Daayan Rahasya.

Pratimayan leaves along with Mohana and Pari, trapping others in the cave. Meanwhile, Sanam discovers that words are written in the opposite direction in the book.

Piya decides to ask for help by using bats while Ansh tries to stop the lava by using the rocks. At the same time, Dilruba tries to tell Naman about Rathods being trapped in the cave.

She gets shocked to see his yellow eyes. Meanwhile, Adi opens a way to move out but his hands get stuck to the rocks.

He uses lava to break free from the rock and everybody moves out of the cave. Piya finds a rock and thinks it’s the only way to beat Pratimayan.

Guru Maa says the time has come when she discovers the bells are not ringing in the temple. Naman starts tying up Sanam and is in Pratimayan’s control.