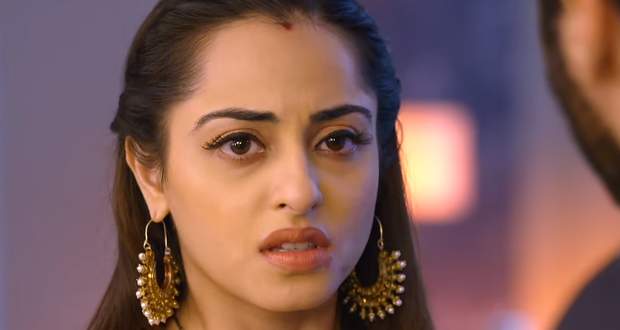 Today's Nazar 4 Feb episode starts with Piya and Nishant hiding behind the wall. Later, Mohana sees Piya’s photograph and she gets out of control.

She remembers that Piya is a Devik and that she tried to kill her. Piya continues to hide while the family members lie that Piya and Ansh have already separated.

Piya also agrees to leave the house to cure Mohana. Meanwhile, Naman is out of control after eating the medicines and also confesses that he likes Saavi.

He reveals that he loves her and falls on the ground. Later, Ansh finds Piya surrounded by plants on the terrace and reveals that she has to stay away from Mohana.

Piya wishes to stay on the terrace around the plants. Piya also shows Ansh her hair turning red while Ansh suggests getting her checked as she scratches a lot.

Rathods are worried about Mohana getting her powers back while Saavi and Naman come with the medicine that can restrict her powers.

They give a liquid made with medicines that can be used to make Mohana’s powers inactive. Later, Chaitali spills the medicine but distract Mohana.

Mohana sees the bathtub decorated and gets angry. Her nails start growing and her eyes start glowing. She says that she is Daayan while Ansh sprays the medicine to calm her.

Meanwhile, Saavi agrees to meet a guy for marriage while Naman is confused about his feelings. He tries to make Saavi believe that the guy is not right for her.