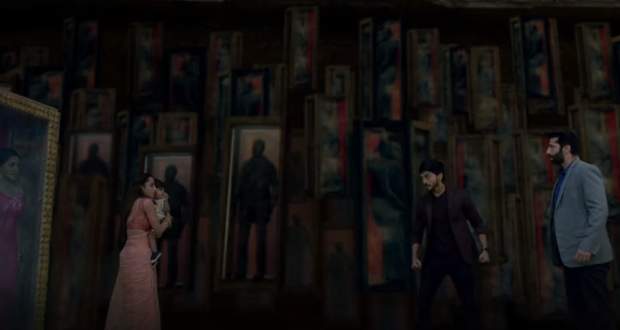 Today's Nazar 4 Jul episode starts with Mohana telling Piya that she left her earring there only. Piya fears Ansh will find out the baby is with her. Mohana says it’s a good thing as Ansh will kill her.

Ansh also reaches the cellar and asks for Piya. Nishant tells him to find Piya herself. Ansh finds Mohana locked in a closet. He realizes whatever Piya was doing had nothing to do with Mohana.

Nishant offers Ansh to help find Piya. He follows Nishant, but the voice of earring makes him realize Piya is behind Mohana.

He finds Piya and tells her she can leave without Adi. Piya attacks him and puts a small knife in his chest. She feels terrible but runs away on Nishant’s demand.

Meanwhile, Naman is still being interrogated by police. They threaten him to find his wife within 24 hours or else he will be arrested. Sanam is standing right behind the police.

Piya asks Saavi and her father to keep Adi safe while she runs away from Ansh.

Guru Maa says she believes Sanam has not killed Mausiji as she would have eaten her alive. Naman is worried about what explanation to give to the police.

The Rathods are blaming Piya for taking Adi when Nishant comes and tells them the truth. Everybody realize their mistake of misjudging Piya. Vedashree’s condition, on the other hand, is getting critical.

Naman, Sanam, and Guru Maa are still trying to figure out the murderer. They find a clue from Sanam that there was someone else there wearing high heels. They go to the crime scene to investigate more.

Shekhar wants to do something for his wife when a box fells out of Nishant’s pocket. He confirms the box contains capsules, out of which one can save Vedashree’s life.